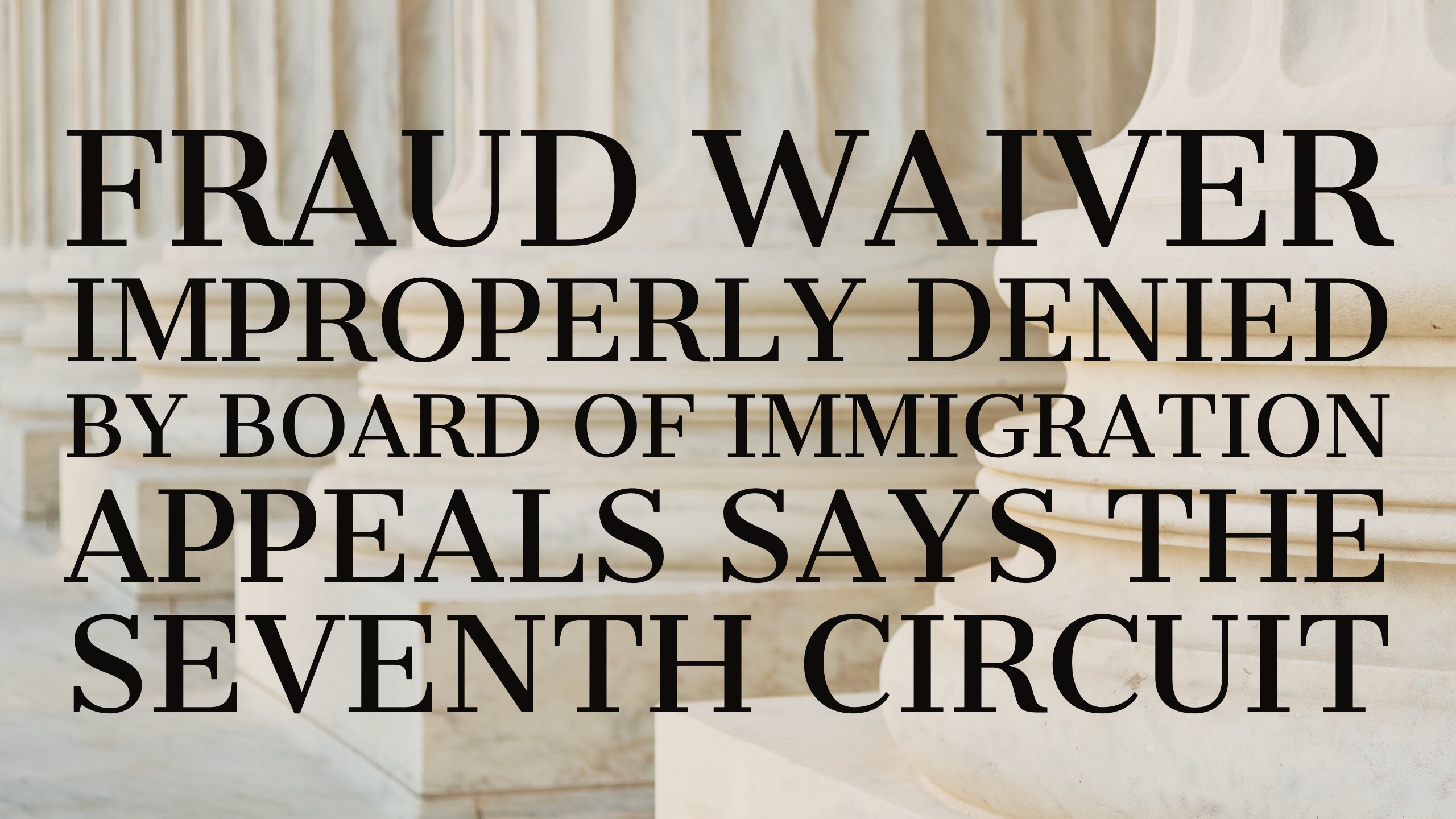 A person in deportation proceedings is eligible for a fraud waiver even when they are not specifically charged with a fraud based basis of inadmissibility.  The Seventh Circuit Court of Appeals recently held that the Board of Immigration Appeals erred in finding that Mr. Acquaah was ineligible for a 237(a)(1)(H) fraud waiver because he was charged with having his permanent resident status terminated, rather than being charged with being deportable for committing fraud.   Acquaah v. Sessions, No. 16-3277 (7th Cir. 2017).

Mr. Acquaah entered the United States on a visitor visa.  He was married to a citizen of Ghana at the time.  He divorced the Ghana citizen and married a U.S. citizen, who filed an petition on his behalf and he was able to obtain a conditional greencard.  Mr. Acquaah and his wife filed a joint petition to remove the conditions of the greencard, but they separated during the pendency of that petition.  INS denied the petition because he had failed to establish that the marriage was bona fide and the agency placed him in deportation proceedings.  While he was separated from his U.S. citizen wife, Mr. Acquaah remarried his Ghana citizen wife, who had received a greencard through the diversity lottery.  Mr. Acquaah, using the name Kofi Obese, applied for a second greencard, which was approved.

Ultimately, throughout decades of litigation, the government found out that Mr. Acquaah had two greencards and the agency charged him with two counts: 1) fraud or willful misrepresentation of a material fact sough to procure an immigration benefit and 2) termination of conditional residency based on marriage fraud.  The Immigration Judge determined that Mr. Acquaah was deportable because his conditional residency terminated.  The Immigration Judge further found that he was ineligible for a 212(h) fraud waiver.  The Board of Immigraiton Appeals affirmed the decision using its own rationale that Mr. Acquaah was not found deportable for fraud or willful misrepresentation count, and therefore he was not eligible for the 212(h) fraud waiver.

The Seventh Circuit determined that the BIA’s decision was too rigid of an interpretation of the statute.  The Court held that even though Mr. Acquaah was found removable for a non-fraud based provision, that because the removal was related to fraud, he was eligible for the 237(a)(1)(H) fraud waiver.  The Seventh Circuit remanded the case for the Immigration Court to determine whether the charge (termination of condition resident status on the basis of his marriage to the United States citizen) was related to fraud.  Of course, if the Immigration Court did so decide, it would further have to decide whether Mr. Acquaah warrants a favorable exercise of discretion.

The Seventh Circuit’s decision helps many non-U.S. citizens apply for a fraud waiver.  It expands the arsenal of an immigration lawyer defending a client from deportation.  It takes the decision out of the hands of the immigration prosecutor, and allows an immigration judge to use discretion to allow a person to remain in the United States, even when there is a legal determination that the person committed fraud, but the person is not charged with being deportable under the fraud provision.