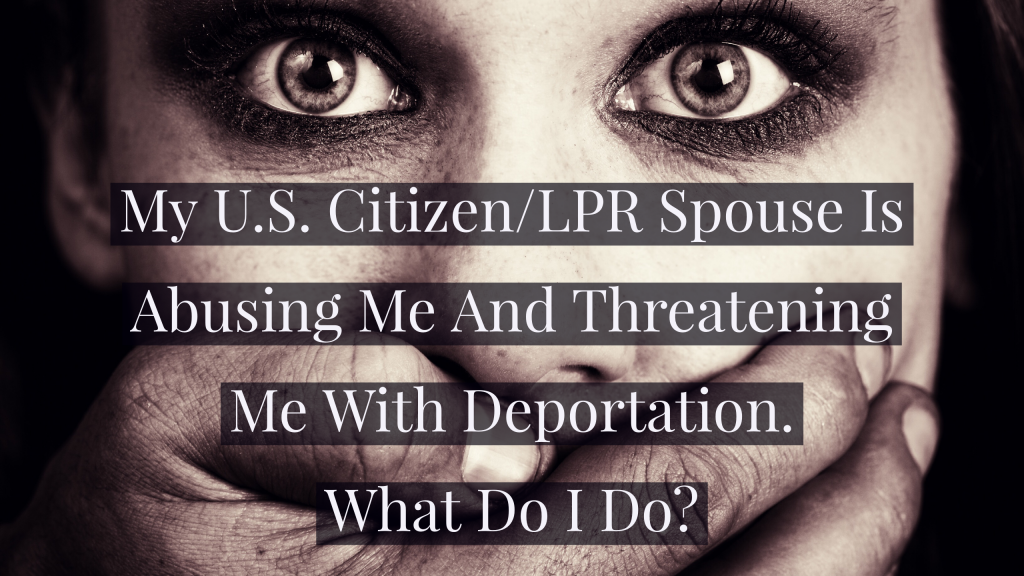 The Violence Against Women Act, or VAWA is a  federal law that was passed in 1994 designed to address domestic violence against women.  The law is broad and encompassing, but one of the goals of VAWA was to protect immigrant victims of domestic violence and to help them escape their abusers.  VAWA allows immigrant spouses or intended spouses of United States citizens and Lawful Permanent Residents to obtain a greencard (lawful permanent resident status) without the need to have the U.S. citizen or LPR spouse petition on his or her behalf.

Who is eligible to adjust status based on VAWA?

An immigrant can self-petition through the form I-360 if he or she meets the following criteria:

What about my children?

Your child can also petition with an I-360 form if the child had a parent-child relationship with the abusive spouse, the child has good moral character, has lived or is living with the abusive spouse, the child was battered or subjected to extreme cruelty by the USC or LPR parent while residing with that parent, currently lives in the U.S or the USC or LPR abusive parent is an employee of the U.S. government or member of the uniformed services.

A child must be under 21 years of age and unmarried when filing the I-360.

Your child may also piggyback on your I-360 petition as a derivative.  The child must be under 21 years of age and unmarried.  They are not required to prove that they have been subjected to abuse or extreme cruelty.

What if it is my child who is abusing me?

VAWA covers parents of grown United States citizen or Lawful Permanent Resident children, as well.  If you are an immigrant and your child is 21 years old or older and a United States citizen or Lawful Permanent Resident, you would be eligible to file an I-360 if you have good moral character, you have or are living with your child and you were battered by or subjected to extreme cruelty by your child.

What do they consider “abuse” or “extreme cruelty?”

“Abuse” is defined as any act or threatened act of violence, including any forceful detention, which results or threatens to result in physical or mental injury.”  This means that you do not have to prove that you were the victim of physical violence.  Threats to have you deported, psychological abuse, forced sexual intercourse, and more could be considered abuse.  The facts of each case will be considered individually.  So, if you have received abusive or threatening text messages, emails, or voicemails from you spouse, save them.  This could be extremely helpful evidence in your VAWA case.

What if I am undocumented?

If you entered the United States without documentation and then married a United States citizen or Lawful Permanent Resident who is or was abusing you, you can still obtain your greencard in the United States by filing an I-360 Petition and I-485 Application to Adjust Status.  The law does not require that you were lawfully admitted or paroled into the country.

Will I be able to become a United States citizen?

Once you become a Lawful Permanent Resident through the I-360 and I485 process, you can naturalize and become a United States citizen in only three (3) years from when you obtained your greendcard.