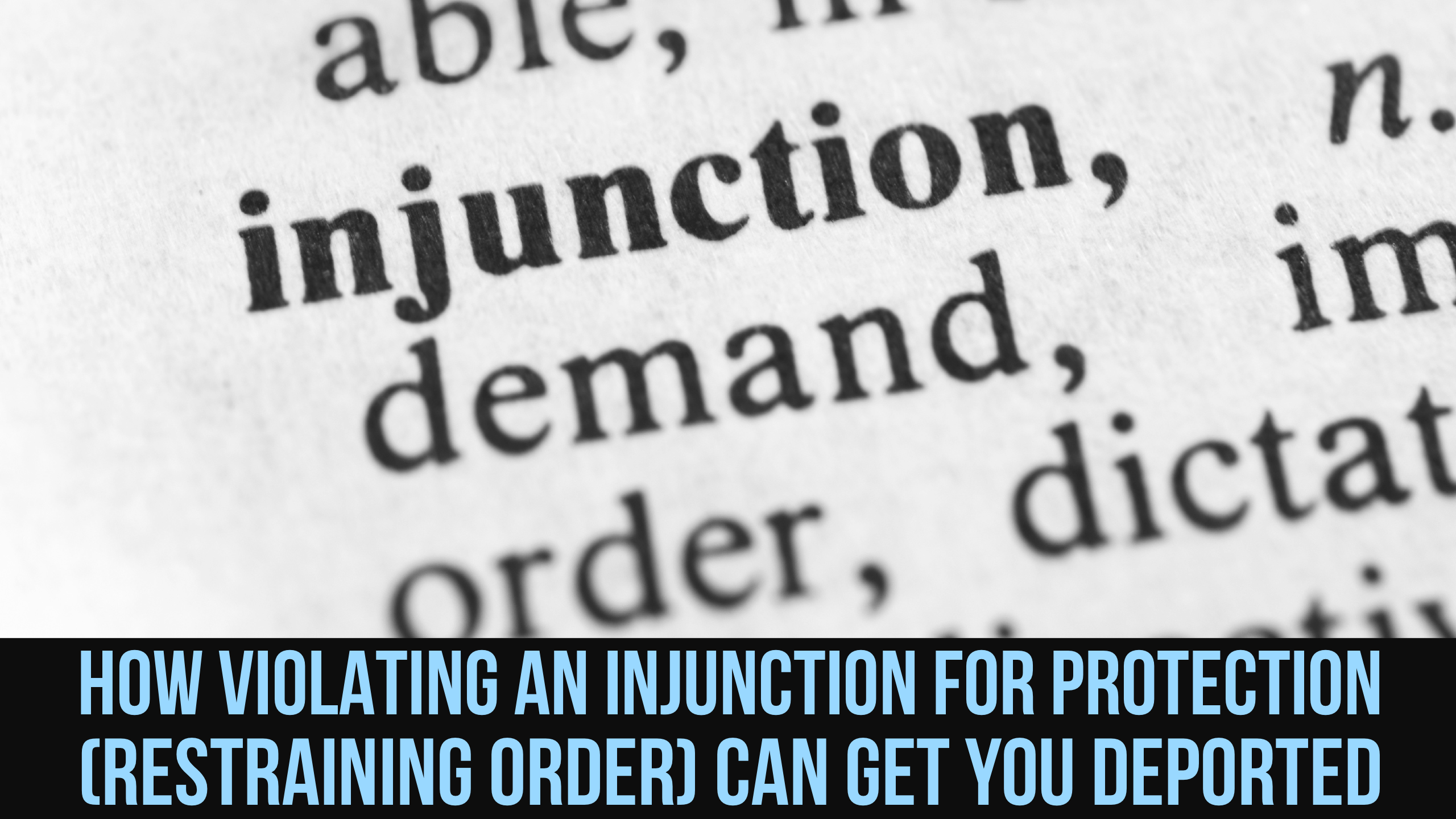 Violation of an Injunction for Protection is a landmine for non citizens.  If you, or a loved one, is not a United States citizen and have been served with an injunction or charged with violating an injunction, call an experienced immigration attorney for a consultation.  Here’s why:

The Immigration and Nationality Act includes a provision that makes a non-citizen deportable if they have an injunction for protection (aka restraining order) against them and the court determines that person violated the injunction by engaging in the conduct the injunction was meant to prevent.  INA §237(a)(2)(E)(ii)

What is an Injunction for Protection?

How Can I be Deported if I Violate the Injunction?

It doesn’t matter how long the person has been in the United States or how long they’ve been a lawful permanent resident with a greencard.  This is scary because the burden of proof to obtain an injunction is very low.  Judges typically want to issue the injunctions because they see it simply as a civil order to stay away from someone.  They don’t typically know the consequences it could have for immigration purposes.  Also, injunctions are often obtained as a weapon to be used in disputes, child custody battles or divorce proceedings.  False allegations could lead to a finding by a court that the injunction was violated which then could lead to deportation under INA §237(a)(2)(E)(ii).

What Evidence Does the Government Need to Deport Me For Violating An Injunction?

Unlike most statutes relating to deportation for criminal conduct, the government does not need a conviction to deport someone for violating an injunction.  The statute only requires a finding by a judge, not a conviction.  The process of what the Immigration Judge should look at to determine whether a person is deportable under this provision was recently outlined by the Board of Immigration Appeals in an appellate decision named  Matter of Obshatko, 27 I&N Dec. 173 (BIA 2017).  In that case, the Board of Immigration Appeals held that because no conviction is required under the statute, the Immigration Judge “should consider the probative and reliable evidence regarding what a State court has determined about the alien’s violation.”

The BIA determined that the Immigration Judge should engage in a two step process:

In order to make these two determinations, the “Immigration Judge should admit and consider all the probative and reliable evidence that relates to the respondent’s violation of the protection order…”  Unlike most convictions where the Immigration Judge can’t look at the facts of the particular case and can only look at the State statute and whether the statute as a whole qualifies as a deportable offense, for anyone who is found by a judge to have violated an injunction for protection, the Immigration Judge can look at police reports, affidavits, recordings, text messages, and more.