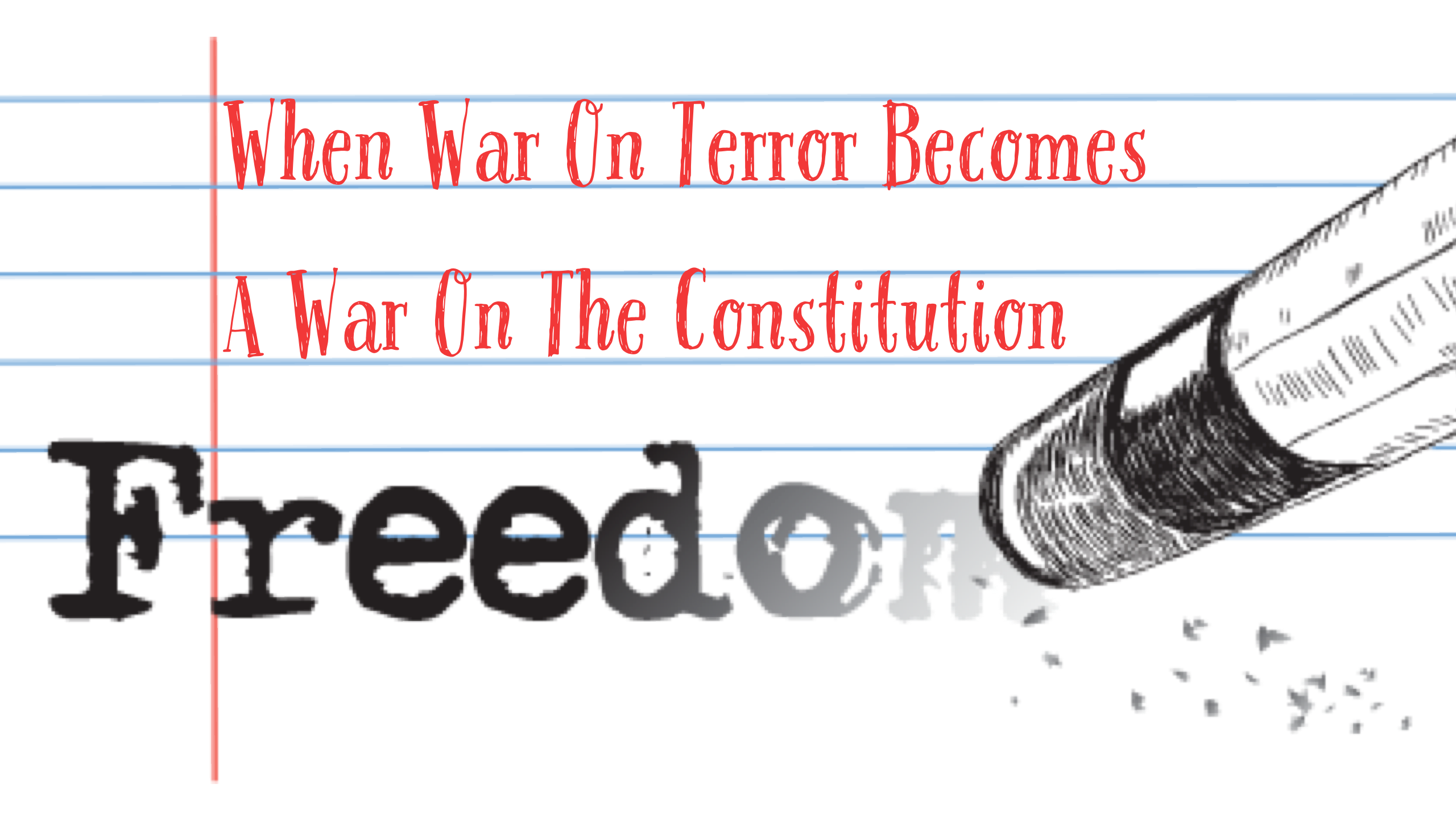 The Merriam-Webster definition of “terrorist” is “an advocate or practitioner of terrorism as a means of coercion.”  “Terrorism” is defined as the systematic use of terror especially as a means of coercion.  “Terror” is defined as a state of intense fear.  Who decides who a terrorist is?  The police officer?  The judge?  Does it include domestic “terrorists?” Does it include a person who goes on a home burglary spree?  If not, why?  Doesn’t a serial burglar instill an intense fear?  Does a burglar practice the burglaries as a means of coercion?  Is a suspected gang member a terrorist?  These are difficult questions to answer.  And the fact that it is so difficult to limit the pool of people that a constitutional exception would apply to is the very reason that our founders applied the constitution so broadly.  When we give up a small piece of our individual freedoms in exceptionally dangerous times, it tends to fester and expand like a virus, perpetually eroding constitutional protections for a larger and larger pool of citizens. The more we limit the application of the Constitution, the more we will convict and imprison innocent people.

Why do we have constitutional protections in the first place?

In the 1700s, under British rule, the colonies were subjected to what they perceived as indignities, loss of individual freedoms, and unfair treatment by a far away government.  In setting up a new government, it was paramount that there be a ruling structure where individuals did not fear their government.  Individual liberty was prized above the greater good.  The British believed that they were acting reasonably in difficult times of war and rebellion.  They would commandeer colonial residences and house troops “for the greater good.”  Individual freedoms gave way to the necessary tactics in unusual times.  As a contributing factor to the revolution and to the dogmatic pursuit of victory by the colonials, the founding fathers realized that they had to create a constitution that applied to everybody at all times.  The arbitrary decision to apply the Constitution in only some circumstances and not in others or to apply it to some people and not to others would erode the document over time.  Boiled down to the simplest terms, when you tell a child “no,” the meaning is clear.  Everybody understands.  When you tell a child, “well, maybe, but only if.. and when…and not when…,” the message is lost and the child has no clear understanding of your intent.  The same is true with the Constitution.  The more exceptions and caveats we make as to who it applies to and when it applies, the less we understand its language and its meaning.  The result is a watered down document that no longer carries the weight with which it was created.  That is how the founding fathers wanted it.  Clear.  Precise.  And eternal.

How would holding terrorists as enemy combatants erode the Constitution?

Whenever a court makes a decision on whether a governmental action is constitutional or not, it creates precedent.  Precedent allows a later attorney to argue that the government action applies in their case because of the decision in the prior case.  For example, let’s say that a court held that the constitutional protections did not apply to Mr. Ullah because he was not a United States citizen, we are in a time of war and Mr. Ullah is an enemy combatant.  There would be many things wrong with this ruling, but for our purposes, let’s focus on precedent.  With this decision, the court has created legal precedent.  Now, let’s say a Christian lawful permanent resident from Canada that has lived in the United States his entire life is accused of committing a series of burglaries.  The governmental attorney prosecuting him could argue that he is not entitled to a lawyer or to remain silent because of the precedent in Mr. Ullah’s case.  He, like Mr. Ullah, is a lawful permanent resident.  He, like Mr. Ullah, committed a terroristic act, under a broad reading of the definition, instilling fear in the community by committing home burglaries.  You may say to yourself, “Good, he doesn’t deserve to remain silent or to have a lawyer.  Lock him up.”  But what if he’s innocent?  What if he wasn’t anywhere near where the crimes occurred and he could prove it, but he doesn’t have a lawyer and nobody will listen to him?  This is why we have constitutional protections in the first place.  We cannot delegate the authority to pick and choose who the Constitution applies to.  When we do, the probability of innocent people being convicted dramatically increases.  When we start accepting wrongful convictions as acceptable collateral damage, then we truly have lost sight of who we are as a nation and where we came from.