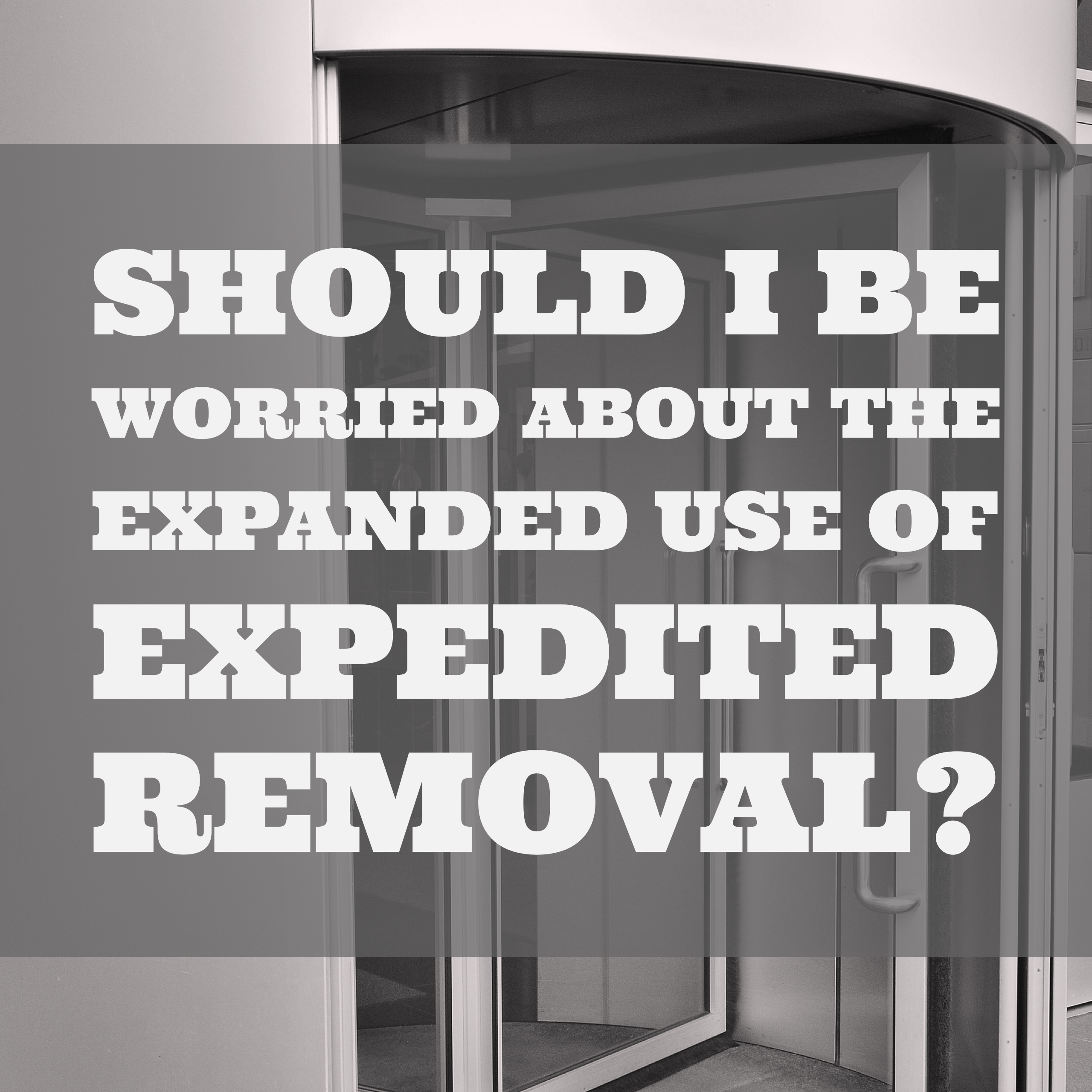 Recently, memos have surfaced that the Trump administration is working to expand the use of Expedited Removal in an effort to become tougher on immigration enforcement. This is bad news for anyone in the United States who doesn’t carry around their U.S. birth certificate, passport, or green card at all times. This is really bad news for anyone who entered the country without inspection or valid immigration documents less than three months ago.

What is Expedited Removal?

Expedited Removal is a way that immigration officers can detain and order someone removed from the United States without taking them before an Immigration Judge. This is one of many “alternatives to removal proceedings” that the government can use to obtain an order of removal against a non-citizen while trying to keep them out of court.

DHS defines Expedited Removal as, “[t]he statutory authority to order certain aliens removed from the United States without further hearing or interview, unless the alien indicates an intention to apply for asylum, or expresses a fear of persecution or torture if returned to his or her country.” The authority comes from Section 235(b) of the Immigration and Nationality Act.

By law, DHS is allowed to apply Expedited Removal to two general types of people. Those at an air, sea or land port seeking admission to the U.S. without valid documents and any non-citizen, anywhere in the United States who does not have a green card, who has entered the U.S. without admission or parole (illegally), and is unable to prove that they have lived in the U.S. continuously for the last two years.

Who does the government currently use Expedited Removal against?

All past Presidents have limited the use of Expedited Removal inside of the United States to the following group of people: any non-citizen who does not have a green card who has entered the U.S. without admission or parole (illegally) and is caught within 100 miles of an international border and within 14 days of their entry.

Obviously, this limits the use of Expedited Removal inside of the United State to a 100 mile window just inside our northern border with Canada and our southern border with Mexico. It also limits the use of Expedited Removal to only people who last entered the U.S. illegally in the last two weeks. So if a person entered the southern boarder without admission or parole 15 days ago and Border Patrol then finds them one mile from the border, they get to go see an immigration judge and cannot be ordered removed by an immigration officer.

How is the Trump administration talking about expanding Expedited Removal?

What the Trump administration is thinking about doing is expanding Expedited Removal to any non-citizen and non-lawful permanent resident caught ANYWHERE in the United States after entering illegally and who CANNOT PROVE THEY HAVE BEEN IN THE UNITED STATES CONTINUOUSLY FOR MORE THAN 90 DAYS.

That’s right, under this contemplated expanded policy, if you are driving down the street in Kansas (where near a land, sea, or airport) and Border Patrol pulls you over, you better be able to prove that you are a U.S. citizen, have a green card or were lawfully admitted to the country or you could be facing an Expedited Removal order. This may sound alarmist, but it’s not. There are millions of people who are in the United States without lawful status. At any moment, anywhere in the country, they can run into an immigration officer. Under this possible expanded policy, if you cannot prove your lawful status or lawful admission into the country, and cannot prove you have been in the country for more than 90 days, you can be detained and ordered deported under Expedited Removal.

What can I do if immigration officers question me about my status or subject me to Expedited Removal?

If you refuse to talk to an immigration officer, under certain circumstances, they can detain you to determine your identity and your immigration status. Do not physically or violently resist an officer who is trying to detain you, again this will make things much worse because resisting arrest with or without violence can be another separate crime.

If immigration officers detain you and you have lawful status, be sure to tell them early and often. If you are detained by immigration officers and do not have lawful status, you may want to stop talking and ask for an attorney as soon as possible. There are ways to avoid being subject to Expedited Removal and to have your day in court to fight against deportation,  including if you have a fear of persecution or torture upon returning to your home country, or if you can prove you don’t qualify for Expedited Removal. Contacting an attorney as soon as possible after you have been detained is the best way to protect yourself against deportation.